The lawmakers wrote to Yellen in a letter, calling on her to address the onerous and “unworkable” regulations created by the so-called bipartisan infrastructure bill, or the $1.2 trillion Infrastructure Investment and Jobs Act.

The House lawmakers wrote the Infrastructure Investment and Jobs Act “imposed” reporting requirements on digital assets, such as Bitcoin, that are “incompatible with the technology’s operations and the privacy rights of users.”

Many experts believe that the regulation may send American jobs overseas and violate Americans’ privacy. 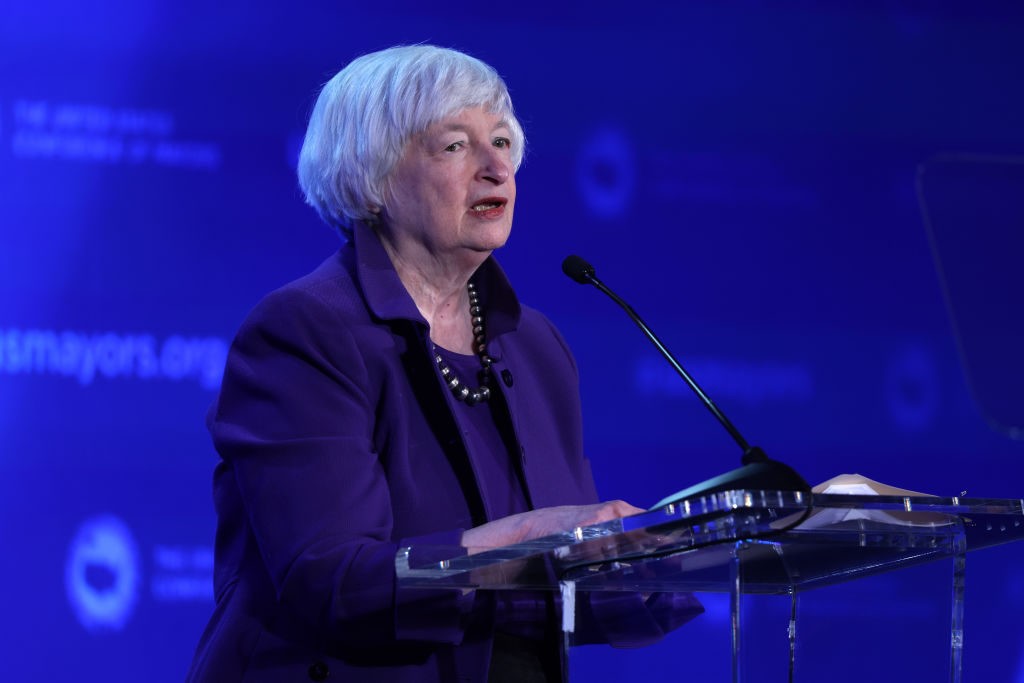 U.S. Secretary of the Treasury Janet Yellen speaks during the 90th Winter Meeting of The United States Conference of Mayors on January 19, 2022 in Washington, DC. (Alex Wong/Getty Images)

The lawmakers called on Yellen to back H.R. 6006, the Keep Innovation in America Act, which many of the letter signatories back, to provide the “necessary clarity to the digital asset ecosystem.”

The lawmakers on the letter include:

The lawmakers explained that the reporting requirements in the so-called bipartisan infrastructure are too “ambiguous” and that their reforms would help “constrain” the regulation so that non-brokers such as miners, stakers, protocol nodes, payment channel nodes, software developers are not harmed in the process:

Specifically, Section 80603 is ambiguous such that it affords the Department of Treasury the ability to interpret who within the digital asset ecosystem qualifies as a “broker.” This subjective interpretation has the potential to reach those beyond the intent of Congress. To help constrain a potentially expansive reading of the “broker” definition, we would point you to the definition of “broker” proposed in H.R. 6006. This definition clearly avoids placing unworkable customer reporting obligations on persons who do not, in actuality, have customers (e.g. miners, stakers, protocol nodes, payment channel nodes, developers of protocol or decentralized application software, or similar non-custodial entities).

Additionally, the Act provided the Secretary with broad authority to define a digital asset. We would point you to the definition of a digital asset set forth in H.R. 6006 to ensure the parameters of the definition are clear. It is also crucial that Treasury narrowly specify the information that is intended to be captured by a “broker” when transferring a digital asset to an account maintained by a non-broker. Separately, the addition of “any digital asset” to the definition of cash for purposes of Section 6050I of the Internal Revenue Code should be carefully examined prior to its implementation to ensure unintended consequences are mitigated. Over hasty application of these requirements risks the creation of an unlevel playing field for transactions in digital assets and those required to provide them.

“As nascent financial technologies develop, we must ensure requirements imposed on the digital asset ecosystem are both crafted and implemented in such a way to ensure the United States remains at the forefront of financial innovation,” they added. “We believe consistent information reporting on digital asset transactions is necessary.”

The lawmakers concluded in the bill, “However, it should not prevent these technologies and the ecosystem from continuing to flourish due to unclear regulations that only create uncertainty.”