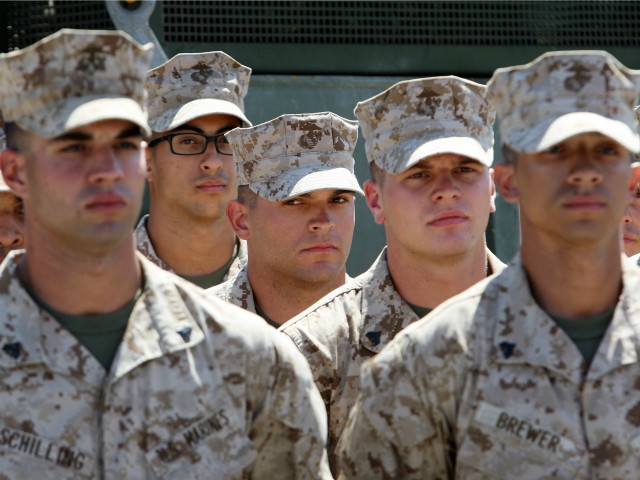 About 1,000 U.S. Marines were activated on Friday to assist in border operations ahead of a migrant caravan making its way towards the southwest border of the United States, officials say.

“Marines will absolutely be a part of Operation FAITHFUL PATRIOT. We are currently working the numbers and units to identify those who have already deployed and those preparing to deploy,” said Air Force Capt. Lauren Hill, public affairs officer for U.S. Northern Command (Northcom).

The approximately 1,000 Marines who were activated are currently based at Camp Pendleton in San Diego, California. The Marines will do about two days of training for border operations, and will then figure out where Customs and Border Protection (CBP) need them.

“They are going to be assigned against border missions,” Northcom spokesman John Kornelio said. “They’ll work with CBP to figure out what CBP needs.”

The Marines would be part of the initial 7,000 who are deploying, are in the process of deploying, or who have deployed.

Defense Secretary Jim Mattis ordered the deployment last Friday to reinforce the Department of Homeland Security (DHS) and CBP in their efforts to secure the border, ahead of two known caravans headed from Central America to the U.S. border.

CBP Commissioner Kevin McAleenan said Monday that one caravan consists of approximately 3,500 migrants, and another, approximately 3,000. He said the caravan phenomenon was “new and challenging.”

“For the two large groups that we are following, we have already seen the first one make unlawful entry across two international borders and the second, still in Guatemala, has deployed violent and dangerous tactics against both Guatemalan and Mexican border security teams,” he said.

Northcom Commander Air Force Gen. Terrence O’Shaughnessy said Tuesday that the main caravan was unlike anything officials have seen before.

The DHS said Thursday that more than 270 individuals in the caravan have criminal histories.

Those include a number of violent criminals – examples include aggravated assault with a deadly weapon, armed robbery, sexual assault on a child, and assault on a female. Mexican officials have also publicly stated that criminal groups have infiltrated the caravan. We also continue to see individuals from over 20 countries in this flow from countries such as Somalia, India, Haiti, Afghanistan, and Bangladesh. There is a large segment of this population that we know nothing about and we must be prepared to defend our border and enforce our laws to protect the citizens of our country.

There are 26 crossing points on the southwest border from Texas to Arizona to California. The CBP has 100 specially trained special response team operators at each location, and 1,000 CBP officers ready upon the approach of a large group at any port of entry. CBP also has an additional 830 agents ready to deploy between the ports of entry.

According to a list of units released so far, most of the troops deploying are those who can conduct planning, logistics, medical, transportation, and engineering support to the DHS and CBP.

This story has been updated.