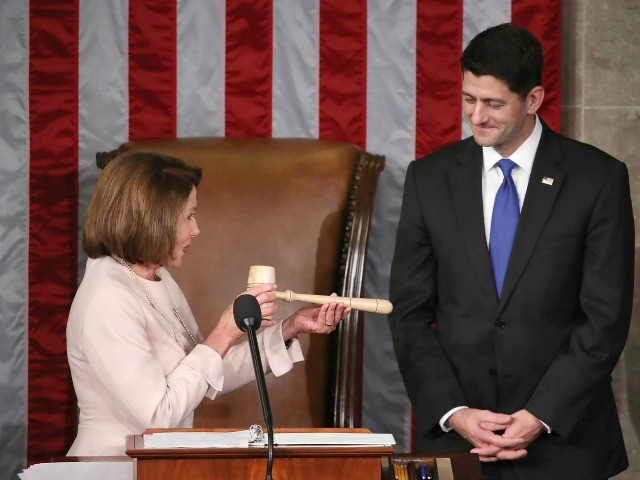 With six days and a few hours until the polls open for the 2018 midterm elections, control of the House of Representatives is now down to ten key races.

The battle between Republicans and Democrats for the majority is so tight, it may come to just a handful of districts across the country. These ten districts represent some of the closest battleground races for control of the House majority.

Ten toss-up races remain, down from the 20 identified by Breitbart News on October 19.

The ten remaining toss-up races are:

VA-07: This race between incumbent Rep. David Brat (R-VA-07) and Democrat Abigail Spanberger, a far left former CIA official, is the most hotly contested and consequential race in the country.

“Republican strength in the district has been waning, with victory margins shrinking. Presidential candidate Mitt Romney won the 7th District by 11 percentage points in 2012. Trump won it by six points in 2016. In the 2017 governor’s race, Republican Ed Gillespie beat Democrat Ralph Northam there by less than four points,” the Washington Post reported.

A more recent Christopher Newport University Poll, conducted of likely voters between October 18 and October 27, however, rated the race as “a statistical tie.”

Of these likely voters, 46% favor Spanberger while 45% favor Brat. Libertarian candidate Joseph Walton has 4% and 3% are undecided (see Model 1, Likely Voters). The model’s margin
of error is +/- 4.2.

The seat was supposed to be an easy pickup for the Democrats, but they made the mistake of nominating 77-year-old Donna Shalala, the former head of the Clinton Foundation and former Clinton administration cabinet official who does not speak Spanish in a district that is 56 percent Latino. Republicans nominated Maria Elena Salazar, the bilingual former Telemundo broadcaster, a telegenic and charismatic candidate more than two decades younger than Shalala.

A poll taken earlier in October showed Salazar leading Shalala by two points, but the most recent polls show either a statistical tie or Shalala with a slight lead.

FL-26: Incumbent Rep. Carlos Curbelo (R-FL-26) currently represents another Miami area district which is has been slightly Democratic historically. The Democrats nominated a compelling and articulate candidate, Debbie Mucarsel-Powell, who has been gaining ground on Curbelo. A Mason-Dixon Strategies/Telemundo 51 poll conducted between October 3 and October 9 showed Curbelo with a one point lead, a statistical tie.

A New York Times Upshot/Siena College Poll released on Thursday shows the race remains a statistical tie, but has Mucarsel-Powell with a one point lead.

Speaker of the House Paul Ryan campaigned with Tenney in her upstate New York district earlier in the month.

President Trump, who held a rally in the district earlier this month to support Hagerdon, won the district by 15 points over Hillary Clinton in 2016.

MN-03: Incumbent Rep. Erik Paulsen (R-MN-03) trailed Democratic challenger Dean Phillips by five points, 49 percent to 44 percent, in a KTSP/Survey USA Poll conducted between September 24 and September. The intervening month has been filled with charges and counter-charges between the two.

“Phillips, a multimillionaire son of the Phillips distilling family of Minnesota, is running an energetic campaign that is marketed as slickly as a blue-chip tech startup. He is seen as one of Democrats’ best candidates in these midterms, and so far he’s done what other Democrats here have failed to do: make the unflappable Paulsen really sweat,” the Minnesota Post reported on Tuesday.

With no public polls released in the past month, however, the outcome remains very much in the balance.

CA-48: Incumbent Rep. Dana Rohrabacher (R-CA-48) now has a two point lead in this Orange County district over his Democratic challenger, Harley Rouda, in a poll released by Monmouth University last week. While still a statistical tie, a poll earlier this month showed the two candidates in a dead heat, 48 percent to 48 percent.

For more than half a century, Orange County was the strongest Republican county in California. This district, however, has been moving slowly left for some time. In 2016, Hillary Clinton won the district by two points.

PA-01: Incumbent Rep. Brian Fitzpatrick (R-PA-08) holds on to a narrow but shrinking lead over Democrat nominee Scott Wallace, the multi-millionaire grandson of Henry Wallace, FDR’s vice-president from 1941 to 1945 and the 1948 Progressive Party candidate for president.  The district boundaries were redrawn earlier this year to add more Democrats by an unprecedented order from the Democrat-controlled Pennsylvania Supreme Court.

Fitzpatrick held a four point lead over Wallace in late September, but a New York Times Upshot/Siena College Poll released on Tuesday gives him just a one point lead now.

TX-07: Incumbent Rep. John Culberson (R-TX-07) represents a Houston area district that has been historically Republican but has been trending towards the Democrats in recent years.

A New York Times Upshot/Siena College Poll conducted earlier this month showed Harris with a five point lead over Democrat nominee Dan McCready but the most recent polls show the race is a dead heat.

Fivethirtyeight.com currently gives the Democrats a six in seven chance (86 percent) of winning a majority in the House of Representatives next Tuesday, up from the five in six chance it gave them on October 19.